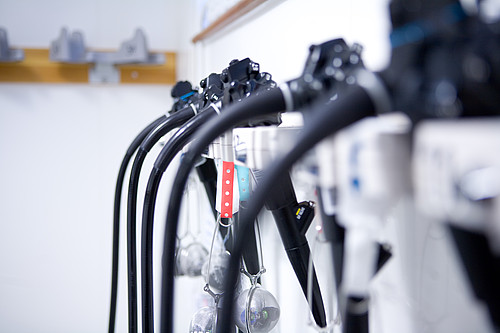 Gastroenterology covers a wide range of disorders including those of the gastrointestinal tract in its entirety, the liver, the pancreas and the biliary tree. The diversity of organs affected and the numerous diseases afflicting these organs makes Gastroenterology a particularly attractive specialty.

Endoscopy is a central component of Gastroenterology with sub-specialty training in oesophageal therapy, endoscopic retrograde cholangiopancreatography, endoscopic ultrasound, portal hypertension, small bowel studies, as well as more conventional upper and lower gastrointestinal endoscopy. Gastroenterologists in East Anglia also contribute to general medicine and the majority of trainees to date have achieved dual accreditation. A major attraction of Gastroenterology has been the evolution of critical collaborations with radiologists, pathologists, GI surgeons, liver transplant teams, and a variety of clinical nurse specialists, nutritionists and psychologists.

The deneary tends to be geographically split into East (Norwich based) and West (Cambridge) but with the option to move according to preference and to remain for several years within a sub-region – the programme director being as accommodating as possible in this regard. Bedford, Huntingdon, Ipswich, Great Yarmouth, King's Lynn, Bury St Edmunds, Basildon, Colchester, Stevenage, Watford, Chelmsford, Peterborough and Luton & Dunstable hospitals are smaller units with between three and six lead gastroenterologists.  Each of these offers an excellent mix of Gastroenterology and general medicine as well as variable specific training including ERCP, oesophageal manometry, capsule endoscopy, balloon enteroscopy and EMR.  The units at Norwich and Cambridge are larger and allow sub-specialty exposure in Hepatology, Nutrition, Inflammatory Bowel Disease and advanced endoscopy (EUS and ERCP), which can be either as part of the rotation or a dedicated Advanced Training Programme (ATP).

The opportunities for research are outstanding and range from basic science to translational medicine and clinical trials. The majority of research opportunities within East Anglia are on offer in Cambridge and Norwich medical schools. There are currently several ACFs and NIHR/University Clinical Lecturers in place at the two centres as well as many opportunities for out of programme research. Cambridge has a Chair of Gastroenterology and has several established academics with internationally acclaimed research pedigree. The main research areas are in inflammatory bowel disease, Barrett’s oesophagus and oesophageal cancer as well as in various aspects of hepatology. Cambridge is a Biomedical Research Centre and CRUK Experimental Medicine Centre with particular strengths in metabolic and inflammatory diseases as well as cancer. Norwich Medical School has a vibrant research programme in Gastroenterology with a number of Chairs and Academics.  Out of programme experience for research is encouraged provided that advance notice is provided to Health Education England, Working across the East of England - Information can be found here.

All train​ees are appointed to the whole region and not to specific posts or rotations.

The rotation is complex because of the varying needs (educational and personal) of the trainees, the service needs of the units, and fluctuation in numbers caused by trainees leaving the programme for out of programme experience.

In general, there are 49 posts currently in the region. Trainees generally spend their 1st year in one of the smaller DGHs with exposure to general gastroenterology including diagnostic endoscopy as well as GIM.  The second year is often in a larger DGH with some subspecialty experience.  Most of the 3rd and 4th years will be spent in the Teaching Hospitals and the final year usually involves a DGH placement.

Trainees based in Norwich can expect to spend two years in the teaching unit. Due to the distribution of posts based around Cambridge, trainees on these programmes will spend an average of 18 months (some will spend 1 year and some 2 years) in the teaching hospital, whereas 24 months is more likely for those based around Norwich. The second teaching hospital year will be most likely an ATP as specified in the 2010 curriculum.

Whilst there is an obvious degree of geographical separation between trusts, this is not fixed and some posts will receive trainees from both ends of the rotation. The TPD will take personal travel arrangements into account for placements and will try not to make the huge rotational moves

The standard date for rotation to new posts is the 1st Monday in September. Where new appointees join the region at another date (usually the August recruitment) they will usually spend 13 months in a unit before the next rotation, however their initial placement will be determined by the vacancy situation.

Gastroenterology is a hugely rewarding specialty to embark upon with a wide variety of sub-specialties that can be chosen from. The Eastern Deanery allows a real balance of training with both teaching hospitals in the region renowned for research as well as providing excellent Gastroenterology training.

There are several axes within the region – Cambridge, Norwich, M1 corridor and Essex. You will get at least 1 year in one of the two teaching hospitals. Geographical constraints will be accommodated but you should be positively seeking out specific training opportunities.

For a full list of upcoming training events and study courses aimed at all medical specialties within the region - Please visit the following links: