After finishing core training I have decided to spend some time working in other environment. I have applied for an OOPE and this has been supported by the deanery. It has been in my head for quite a while to do some humanitarian work, and so I have joined Médecins Sans Frontières. I have spent almost a year working with them in two different projects.

MSF is an international medical humanitarian organisation. It has been founded in 1971 during civil war in Biafra, Nigeria by the group of French doctors and journalists. Since then it has assisted in many emergencies ranging from natural disasters, famine, armed conflicts, and refugee crisis to epidemics.

It provides emergency medical assistance to people in about 60 countries around the world. It aims to treat the most vulnerable and often forgotten by others. Although being international organisation, over 90% of staff is in fact national.

Independence, impartiality and neutrality are the key points set out in MSF Charter. In order to maintain independence over 90% of funds come from private sources. MSF believes in speaking out publicly (témoignage) when massive and neglected acts of violence against individuals and groups are witnessed. 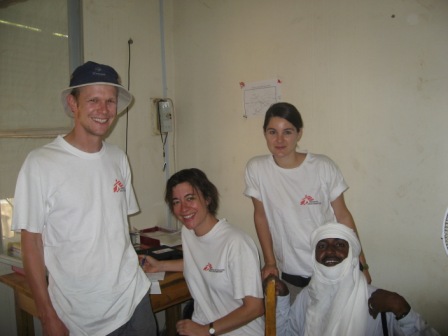 I have spent 2 months in Niger, landlocked country of 15 million inhabitants located in West Africa. 80% of the surface area is covered by Sahara desert. It is one of the poorest countries in the world, situation being complicated by political instability and recent coup d’état.

During world’s swine flu hysteria, another epidemic which has claimed more lives than swine flu went relatively unnoticed. Meningitis A is a disease caused by an epidemic strain of meningococcus. Epidemics occur every 8-10 years in so called meningitis belt - area of sub-Saharan Africa, which includes countries like Ethiopia, Sudan, Chad, Niger, Nigeria, Burkina Faso, Mali etc. They occur always during the dry season. High risk groups are children and young adults. 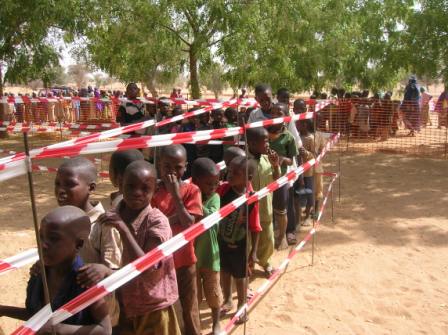 Queuing to get vaccinated

State of epidemic has been declared in early 2009 and the biggest vaccination campaign in MSF history has been launched. I have taken part in this operation in region of Zinder, south-eastern region of Niger. Our section – MSF Suisse, has been operating in the area for some time, working in nutritional projects as this region periodically suffers from famine and malnutrition. This situation, however, exceeded capacity of a ‘regular’ project, and an emergency response was required.

Emergency team consisting of 35 expatriate staff has arrived in waves to help to organise and run this rather big logistical operation – cold chain to be set up as the vaccine is heat sensitive, cars to be hired (we had 150 of them), vaccination sites needed to be built or adapted on a daily basis, vaccinators employed (over 60 vaccination teams, each 5-7 members, all employed locally) etc. 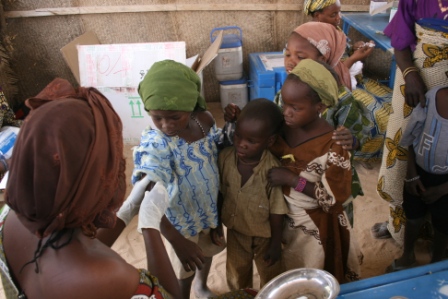 Treatment (antibiotics, antipyretics) was provided free of charge and distributed across the health centres in the region for people who have contracted the disease. We were visiting villages seeking information if there are any ill persons in order to provide early treatment and transport if necessary. Information about recent suspicious deaths was also sought in order to help to prioritise vaccination response.

This vaccination campaign lasted about 6 weeks and at the end our section has vaccinated almost 1.3 million people, adding to total of 7 million people vaccinated by MSF across different regions and countries. 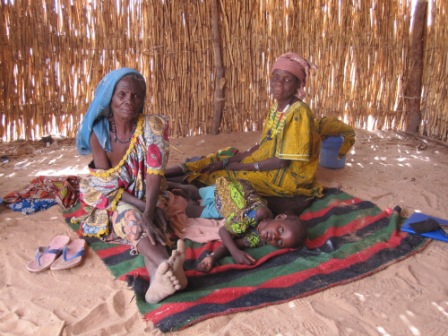 Guinea Republic lies on the shore of West Africa. Despite being known also as a garden of Africa, country appears at the end of the list of countries by gross domestic product per capita. One of the main reasons is long standing military dictatorship – practically since the independence from France in 1958. Military junta, which seized the power after the death of the president in December 2008 failed to deliver its promises of early and free elections. This escalated to violent repression of the opposition manifestation on 28 September 2009, when according to official reports 150 people were killed and many more wounded. Unofficially quoted numbers are higher and there have also been reports of violation of women. After negotiations it finally seems that the elections may take place in June this year.

Our project was based in capital Conakry, Atlantic port on a Kaloum peninsula. Population is rapidly growing and difficult to ascertain, but the estimates claim more than 2 million people which is almost one quarter of the population of Guinea. 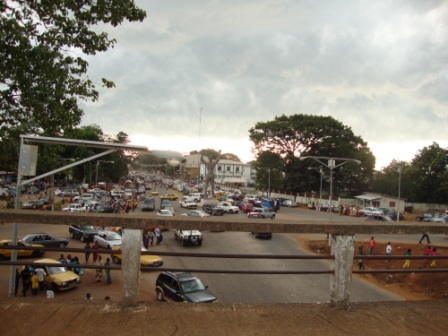 Traffic in the capital Conakry

After evaluations one of the districts has been chosen for intervention. Target population has been defined as children under the age of 5 years and pregnant women, as these represent the most vulnerable groups. The aim was to decrease perinatal and children’s morbidity and mortality. Conventions were signed with ministry of health and existing primary structures to define conditions and the level of support and cooperation. MSF supplied medicaments, medical material and medical equipment free of charge. Water and sanitation and reconstruction works necessary for good functioning were done. Expatriate paediatrician and paediatric nurse collaborated with staff in local health facilities. MSF hired public health agents and trained them to provide health education and raise awareness directly in the community. Expatriate midwife has arrived to support the improvements in management of pregnancy and labour.

My part of project was collaboration with the local neonatal unit, in fact the only neonatal unit in the country. As I have spent the most of my professional life working in neonatal services, this was the task which perfectly suited my abilities (I thought). I didn’t have any high expectations but I haven’t quite realised how different the work conditions, the benefiting population and the results would be compared to western standards. We have provided rather basic levels of care compare to what we are used to – resuscitation, feeding, breastfeeding advice, temperature control, antibiotics, anticonvulsants, oxygen and IV fluids. We didn’t provide any artificial ventilation. 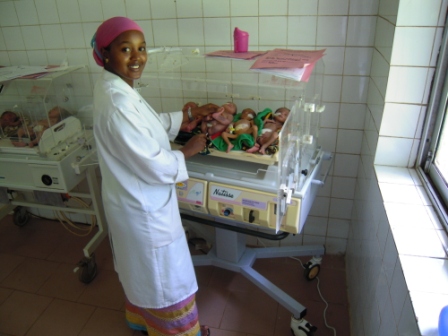 One incubator per child - well, not quite

It was quite challenging to work with the nurses and doctors of whom 90% were unpaid and worked on a voluntary basis. It was not easy to convince them that my ideas were good and would eventually work. It required providing teaching sessions and a lot of hands-on work to prove my points. The biggest change achieved was the introduction of up to date neonatal resuscitation practices among the in-house paediatric doctors and midwives in the close-by maternity unit. There is still a lot to do but the response has been encouraging.

The fact that we have established the service free of charge resulted in gradual rise in numbers of patients. On my arrival in July 2009 we had about 160 admissions per month, in February 2010, when I have left we have reached 250. I am sure that this number will continue to rise, but it already well exceeds the capacity of the unit. This is one of many reasons why mortality rates are very different from ones we are used to in children’s services here. About 25% of patients admitted, roughly 60 babies died each month. This is rather shocking number for us westerners, and there were certainly days when we had difficulties to deal with it, asking ourselves questions what should we do better or differently.

We can help things to improve, that’s the reason of being there, but one variable difficult to influence directly from the hospital was the delay in presentation and the condition in which some of the babies arrived. More than a half of the deaths have occurred within first 24 hours after admission, documenting the grave state in which some of them had come. This underlines importance of public health workers and primary structures in providing health education.

One needs to remain positive and there were certainly things which went well. It could be small things which made your day – happy parents of babies who have gone better, premature babies who manage to leave the unit, septic babies who have improved and survived although you didn’t think they would, nurses and doctors keen to learn, etc. This is a new project; it only started in April 2009. It is very early days to see any results and make any conclusions as yet but a potential is certainly and I hope we will see results in near future. 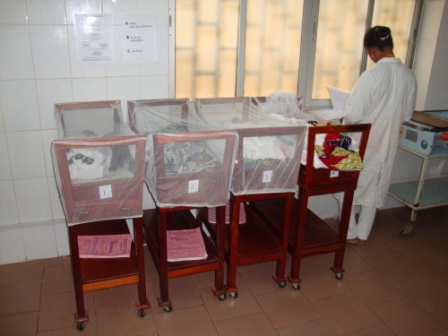 Few words at the end

Experience gained during last year was certainly something which one cannot gain during the training programme here. It was sometimes difficult, but on the other hand it was very interesting. I have met many people and I have gained whole new perspective on the scale of the problems there and here. I am thankful to programme directors in the Eastern Deanery who have supported my wishes and allowed me to experience this unforgettable year and I would recommend to everyone to spend some time in resource limited settings to realize the differences of work and life.