This is a 3 month, full time diploma which is ran in 4 centres across the world; Liverpool, London, Bangkok & Lima. I choose to study at the Liverpool School of Tropical Medicine (LSTM) as the course started in September, which fitted nicely with the paediatric training year in East of England.

The course itself is split roughly into thirds; clinical tropical medicine, entamology & parasitology and public health. Teaching consists of lectures, entamology & parasitology practicals and small group work. The lecture programme is divided into specialities and often delivered by world experts in their subject and consequently is of a very high standard. Laboratory work is focused around entamology (the study of insects); involving identification of various insects & stages of their lifecycle and parasitology; predominantly using microscopes for the identification of various stool and blood parasites including the reading of thick and thin films for malaria. All of the above is tied together in scenario-based group work sessions.

Whilst on the course I successfully applied for 6 month position of temporary study physician in paediatric research in Tanzania with the Joint Malaria Programme (JMP). JMP is an umbrella organisation of the London School of Tropical Medicine & Hygiene, the University of Copenhagen , Kilimanjaro Christian Medical Centre and the National Institute for Medical Research of Tanzania. The amalgamation of these organisations allows for the pooling of resources, facilities and knowledge. 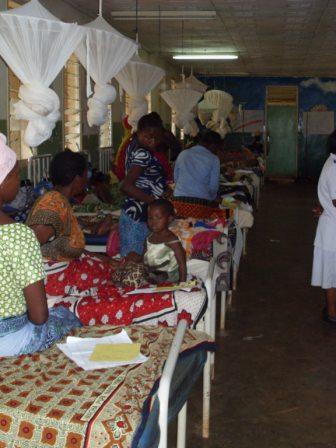 I was based at Teule Hospital, Muheza, a designated district hospital in North East Tanzania with joint governmental and christian mission funding. It has a long history of involvement in research projects, especially in malaria. Teule Hospital serves serving rural population of approximately 277,000 with under 5 child mortality of 165/1,000 (Tanzanian census 2002). P. falciparum transmission is intense and P. falciparum community prevalence in children 2 to 5 years of age was recorded as 88.2% in 2002. The HIV positive rate in ante-natal clinics is approximately 7%. I worked on Hills Ward, the main paediatric ward which included the 5 bedded paediatric ITU. Hills Ward could accommodate up to 120 patients, despite having only 40 beds, by having up to 3 patients per bed. Luckily, for most of the time I was there we had on average only 50 patients.

We had limited resources, with most of those provided by research funding, so rationing of equipment was the norm. ITU comprised of normal care plus the ability to give oxygen. Water was a significant problem and, understandably, somewhat of a local obsession. For at least 1 month, during the dry season, the whole town including the hospital had no water, and even later, when there was water, it was intermittent. Hand washing was not commonly practiced. 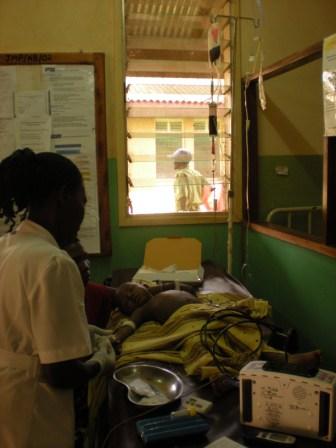 The supply of drugs was limited and often patients would be requested to go buy medication at the pharmacy in town as the hospital was out of stock. This would present problems if the parents were unable to afford them (healthcare at the hospital was free for children under 5 years old)

Due to the research projects we could easily access bedside testing for haemoglobin, glucose, lactate and, for very sick patients, blood gas including electrolytes. Blood and CSF cultures were also performed in the research lab. Investigations possible by the hospital were X-rays (delivering high radiation doses), ultrasound, blood group & cross match, sickle test, as well as HIV testing.

The ward was staffed by both ‘research’ and ‘hospital’ staff, though there was significant crossover in roles. I was one of two doctors (I was classed as ‘the’ hospital paediatrician), in addition we had 5 clinical officers (similar to nurse specialists) and a varying amount of nurses. At night (and sometimes during the day) there was only one nurse for the whole ward. My general responsibilities included for overseeing the work of the clinical officers and nursing staff, reviewing all sick or complex patients, conducting the daily ward round and the teaching of medical and nursing students.

The common diseases were malaria (including cerebral malaria), pneumonia, septicaemia (often following malaria), meningitis and gastroenteritis. We also had an extremely complex cohort of patients with malnutrition, HIV and TB. The ward had a mortality rate of between 5 – 8%, with deaths often occurring soon after admission due to late presentation.

I was involved in 4 main studies, my role included ensuring the appropriate children were screened and enrolled into studies, reviewing study patients, ensuring adherence to study protocol and documentation in case report forms. The studies were:

I was also responsible for the data collection for two sub studies within AQUAMAT I am currently conducting further analysis on pre-existing data from a recently published paper on the appropriateness of the current WHO guidelines on invasive bacterial disease in areas of high malaria transmission which I hope to be able to publish.

For the remaining 2 months of my OOPE I will work as a clinical fellow in Paediatric Infectious Diseases at St Marys Hospital, London.